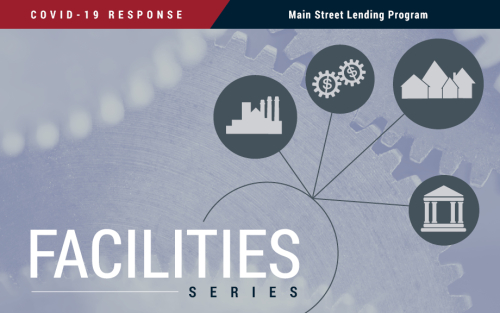 The Main Street loan program was the latest of the facilities launched by the Fed and the Treasury to support the flow of credit during the COVID-19 pandemic. The rest primarily targeted Wall Street borrowers; Main Street was reserved for small businesses that rely more on banks for credit. It was a complicated program that worked by buying loans and sharing the risk with lenders. Despite its delayed launch, Main Street bought more debt than any other facility and accelerated when it closed in January 2021. This article first locates Main Street in the constellation of COVID-19 credit programs, then examines in detail its design and use with an eye on future programs.

Main street in the universe

The facilities space is a jumble of acronyms, so it’s best to start with both types of programs (see table below). Purchasing facilities buy debt; credit facilities lend directly. The latter are close cousins ​​of the traditional block loans, so the three launched last year (or restarted from 2008) were operational in just a few days. Buyout programs, on the other hand, are newer (and potentially riskier) and therefore took longer to build. Main Street needed more time than most because it was buying loans, a more complex and varied type of debt than the “vanilla” bonds or securities bought by other establishments. “This is by far the biggest challenge for… facilities,” Fed Chairman Powell said during the construction.

Main Street bought more debt than the other facilities and sped up to the finish line (see graph below). Its volume of $ 17 billion (as of December 31, 2020) is paltry compared to the $ 525 billion in Paycheck Protection Program (PPP) loans. sperm but is close to the $ 18 billion by which small U.S. banks outside of the largest twenty-five (as were most Main Street banks) globally increased their stock of business loans every six months in average over 2010-19 (FRED).

Close-up on the main street

The design and financing of Main Street was a collaborative effort. The Treasury has committed $ 75 billion and bears the first losses, an important consideration in the overall risk tolerance of the program. The public also contributed over 2,200 letters which resulted in several changes to the program. The Boston Fed administers the program.

The guiding concept was risk sharing without excessive sharing. Lenders could sell 95% of new home loans, with losses (and profits) shared proportionally. Risk sharing was supposed to alleviate the uncertainty (the COVID “fog”) that restricted the supply of loans and free up bank capital (by reducing lending on banks’ books) to support new loans. Buying the entire loan might go too far, as there is little incentive for lenders to screen and monitor loans or find problem loans.

To accommodate the diversity of bank loans, Main Street has taken out three types of loans (see table below). Priority loans and Extended loans could be larger and their borrowers more indebted than New loans but were also older in the default events. Lenders had considerable leeway in these parameters, except for pricing; all loans, risky or safe, had to be 3% above LIBOR. Main Street was targeting mid-sized companies (up to 5,000 employees) that might be too large for PPP but too small to benefit from “Wall Street” facilities. Only banks (and credit unions) were allowed to sell loans to the program. Non-bank (“shadow”) lenders such as finance companies and “techies” are not supervised by the Fed and specialize in riskier loans than banks (Chernenko et al.).

The average purchase was $ 9.1 million (see graph below). The average PPP loan was only $ 101,000 (Hubbard and Strain), so Main Street was successful in targeting more midsize businesses. Priority loans (which can be used for refinancing) accounted for two-thirds of loans and three-quarters of the volume and New loans most of the rest. Extended loans (which involved rewriting existing loan agreements) were not in high demand.

Not a dead end

Demand and supply explain why Main Street did not go further. Senior loan officers said they took on demand for business loans every quarter last year after the first quarter (recessions usually reduce demand for loans). Main Street, a supply side intervention, was pulling a string.

While low demand was arguably the biggest obstacle, some features of the program also turned participants away. Major loan officers who avoid the program have spoken of their uncertainty over how loss sharing (the key element) with the Fed and the Treasury would play out. They reported that some borrowers have been deterred (according to loan officers) by restrictions on wages or dividends. The lack of risk-based pricing may have deterred some more secure borrowers (Vardoulakis; English and Liang) although it has simplified matters. Main Street’s overall risk tolerance also mattered. A more aggressive facility would have affected more borrowers but with higher expected losses for taxpayers (Rosengren). These are considerations for all future main streets.

Don Morgan is Assistant Vice President of the Research and Statistics Group at the Federal Reserve Bank of New York.

Steph Clampitt is a Senior Research Analyst in the Bank’s Research and Statistics Group.

Credit facilities to businesses in the primary and secondary markets

Paycheque Protection Program extended until May 31

SAFE Banking Act for Cannabis will be great, security expert says, but one more thing is needed