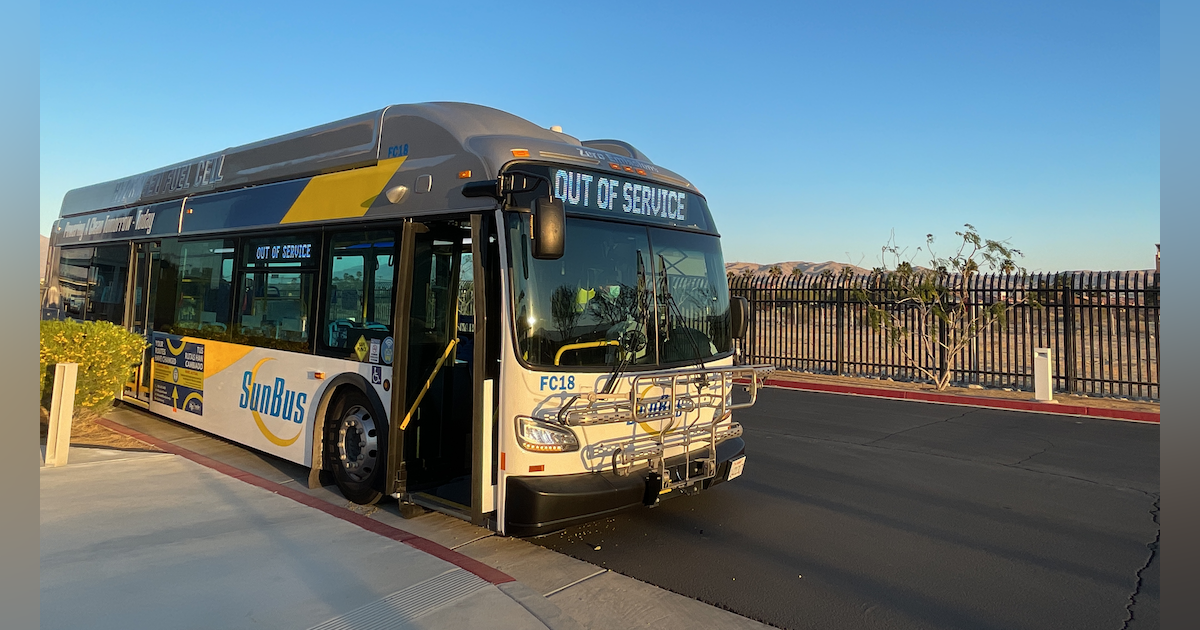 These buses, along with other hydrogen initiatives, arrive in time for National Hydrogen and Fuel Cell Day, October 8, which appropriately matches the atomic weight of hydrogen (1.008) .

By the fifth delivery of New Flyer, SunLine will be in possession of a total of 21 hydrogen fuel cell vehicles. This arrival keeps SunLine on track to convert all vehicles to zero emissions by 2035 – five years ahead of the deadline set by state mandates.

With zero tailpipe emissions generated by a hydrogen fuel cell bus, these vehicles allow the Coachella Valley to maintain a clean environment while continuing to get passengers where they need to go. This addition of US-made hydrogen fuel cell vehicles brings the agency one step closer to zero emissions status.

SunLine’s growing hydrogen fuel cell fleet is made possible through continued investment in on-site infrastructure, including one of the largest dedicated transit hydrogen fueling stations in the United States – l PEM hydrogen electrolyser.

The electrolyzer enables the agency to manufacture its own hydrogen production, providing a pooled fleet and electrolyzer-based refueling solution that is paving the way and accelerating mass adoption of fuel cell buses and trucks among fleet operators. This, in turn, lowers the total cost of ownership of fuel cell bus and truck fleets, making it an effective program to propel long-term carbon footprint and greenhouse gas reductions in all the countries. This technology enabled SunLine to convert its entire fleet to zero-emission vehicles five years before the state mandate.

SunLine has taken initiatives that have allowed the agency to become a test bed for hydrogen fueling infrastructure, fuel cell technology development, and commercial operation of fuel cell buses. As a pioneer in hydrogen technology when it comes to powering zero-emission buses, SunLine Transit says it serves as a model for other transit agencies across the country. By paving the way for the conversion of its zero-emissions fleet, SunLine notes that it is paving the way for other agencies to learn how to implement hydrogen technology to benefit the environment in their communities.

The agency has also forged several partnerships in renewable energy projects to help realize its vision of the future of clean fuels, not just in how they are made, but how the technology will be integrated into the operations of the l transit agency across the country.

Among SunLine’s partnerships is NICE America Research. This group has implemented liquid H2 pump technology and a mobile refueling system. This removes barriers that hinder the widespread use of hydrogen fuel cell vehicles for transportation purposes. The NICE liquid hydrogen system reduces operating costs to a level comparable to diesel-powered buses and takes about the same time to refuel. This technology offers hydrogen stations in the form of a mobile trailer allowing use without a permanent station structure and reduces the cost and time it would take to build permanent hydrogen stations.

The costs are covered, in large part, by grants such as the California Energy Commission’s Zero-Emission Transit Fleet Infrastructure Deployment Grant. This grant awarded SunLine more than $4 million to expand its hydrogen refueling capabilities to include a self-contained liquid hydrogen station.

The new liquid hydrogen station will include liquid storage, vaporizer, compression equipment, gas storage and dispensing equipment. It will also provide both capacity and resilience for existing and future refueling infrastructure alongside the agency’s hydrogen electrolyser. Together, the hydrogen electrolyser and liquid hydrogen station will be capable of powering 57 fixed-route fuel cell electric buses and 39 paratransit fuel cell electric buses. The completed station is expected to be operational by the end of 2023.

As SunLine continues to implement cutting-edge technology, the agency is paving the way for other organizations to follow suit. One example is Southern California Gas Co.’s (SoCalGas) breakthrough technology that produces hydrogen from renewable natural gas at SunLine’s hydrogen fueling station in Thousand Palms. The research project, called H2 SilverSTARS, will produce renewable hydrogen to power SunLine’s fleet of hydrogen fuel cell electric buses and support future expansion. The combination of new technologies will make it possible to deliver renewable hydrogen made from renewable natural gas to any location near a pipeline. The goal is to produce emission-free renewable hydrogen for fuel cell electric cars and other vehicles at a price competitive with gasoline. This project will see the light of day at the end of 2021.

To date, SunLine’s current fleet consists of three fuel modes: hydrogen fuel cell vehicles, battery electric vehicles and compressed natural gas (CNG) vehicles. In line with the SunLine rollout plan, all new purchases of fixed-route vehicles will be zero-emission buses. Since each bus will operate for its entire useful life of 12 to 14 years, the other CNG buses will remain in service until the end of their useful life.