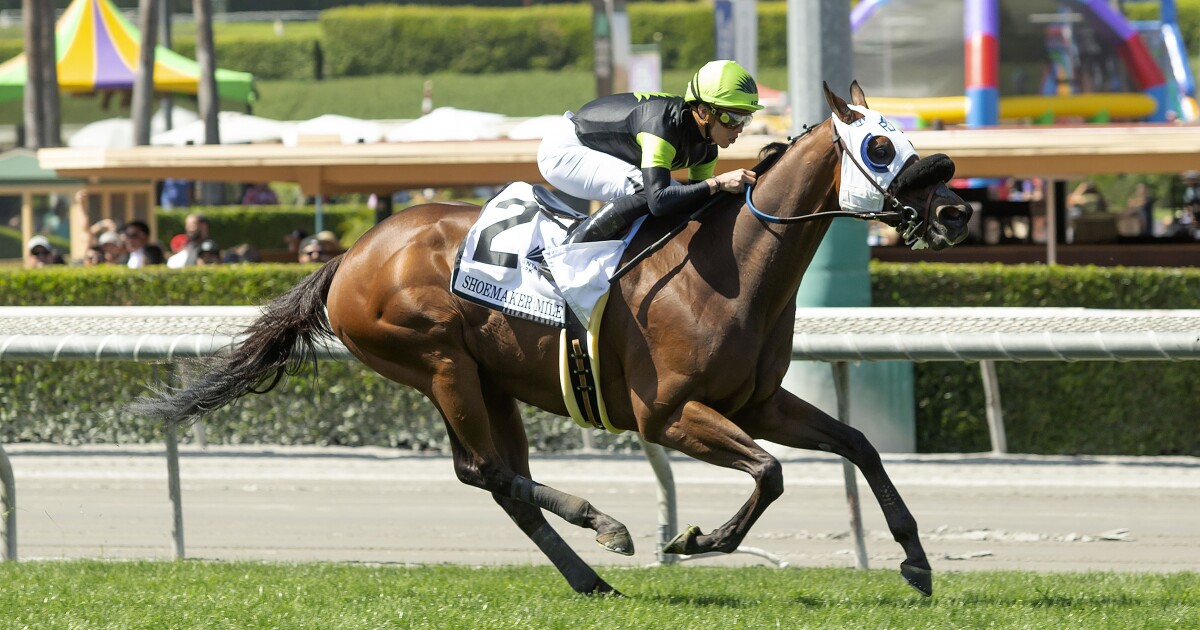 The infield at Saint Anita had once again been transformed into a carnival atmosphere over the three-day Memorial Day weekend. Besides the normal rides and games used to occupy the attention of non-betting family members, there were Corgi races. And who doesn’t like to see something that looks like your everyday dog ​​come out of a makeshift doorway with a little idea of ​​what it’s supposed to do for twenty yards?

But the real transformation of Arcadia’s legendary track has been its focus, and with great success, on improving equine safety. The memory of 2019 had to be erased when Santa Anita was a national pariah following an incredible spike in horse deaths.

Monday was the last big day for the track in its six-month marathon season with three Tier 1 races, including automatic qualification for the Turf Mile in the Breeders Cup November 5 in Keeneland, Kentucky. Santa Anita is set to host the Breeders’ Cup for the 11th time next year. No announcement has been made, but the Breeders’ Cup generally follows a California-Kentucky rotation.

Racing will continue at Santa Anita with nine additional racing days, ending June 19. There are no more grade 1 issues at this meeting. The race then moves to Los Alamitos for a few weeks before the summer meeting in Del Mar.

So far in six months, Santa Anita has had eight horse deaths. Two ran, five in training and one by sudden death, often associated with a cardiac event. Along with the heightened security measures currently in play, there have also been fewer weekly races and a slightly smaller horse population.

In comparison, in 2019, Santa Anita reached that number on January 21, finishing with 30 at the end of the meeting. The track was closed for two weeks at the height of the crisis.

If there are no more deaths, it is a reduction of 73%.

Craig Fravel, CEO of 1/ST Raceformerly known as The Stronach Group, was one of the leaders brought in to right a ship that had the potential to bring down the entire industry.

In an exclusive interview with the Los Angeles Times at Preakness in Baltimore this month, Fravel acknowledged the big improvement, but knows things won’t get done until the numbers get even lower.

“I think it’s important to give credit because credit is due,” Fravel said. “I think the safety improvements are really a team effort. The California Horse Racing Board, the owner and trainer organizations and the individual trainers, the vets on the back, they’ve all helped change the results and change cultures.

“That’s what really had to happen. And I’m not limiting it to Santa Anita. Del Mar was part of it doing the same things we did supporting the same reforms, paying the same attention. And Golden Gate too.

Many of the reforms in California will likely become national in July when the Horse Racing Integrity and Safety Authority standardizes the rules across the country, if it survives legal challenges. Some rules, such as the use of the whip by a jockey, will be more lax than currently in California, but most will be stricter in most state jurisdictions.

“The HISA reforms coming this year will put everyone on a level playing field,” Fravel said. “The safety-focused stuff that frustrates people will be frustrating nationwide and not just in Southern California.”

Fravel referred to an Arkansas track as a less guarded location when it comes to safety.

“Oaklawn shouldn’t have been a haven for people who want to behave differently,” Fravel said. “And hopefully next year that safety valve, or safety valve, won’t be available to people and that’s hugely important.”

Safety was certainly everyone’s priority ahead of the first race at Santa Anita on Monday when Remi Or Not escaped into the paddock, jumped a fence, headed for the barn, then turned back to the people. He was surrounded and no one, including the colt, was injured.

The rest of the card was highlighted by East Coast jockey Irad Ortiz Jr. winning two of the 1 grades.

“I just followed the instructions,” Ortiz said. “[Trainer] Phil [D’Amato] told me to let him do his thing and not rush him. … The horse was ready [Monday]was ready to win.

The win came one race after Ortiz won the $400,000 Hollywood Gold Cup 1¼ mile by one length aboard There Goes Harvard ($19.60) for trainer Michael McCarthy.

“I just can’t thank Irad enough here,” McCarthy said. “Everyone involved, my grooms, my guys, everyone in barn 59, big day.”

The final Grade 1 stakes of the day, the $400,000 Gamely Stakes for fillies and mares running 1 1/8 miles on turf, were won by Ocean Road ($12.20) for jockey Umberto Rispoli and coach Brendan Walsh.