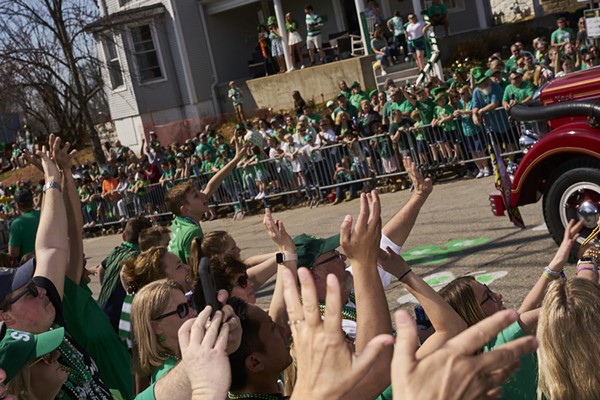 UPDATE 9:55: St. Louis Police have confirmed that a 68-year-old man died yesterday during the St. Patrick’s Day Parade and Irish Festival in Dogtown.

Police spokeswoman Evita Caldwell told the RFT the man “suffered a medical emergency and was taken to hospital where he was pronounced dead”. Police did not release the man’s name.

Todd Alan saw the events unfold at the parade, which resumed yesterday for the first time in two years. Alan tells us:

[T]the parade stopped…followed by a fire truck and an ambulance that took the wrong course. The EMT applied chest compressions to the man until it was clear there was nothing else he could do and the ambulance took him away. At that time, there was no rush to the hospital.

Alan said that before the ambulance arrived, a woman who works as a trauma nurse jumped over the parade fence and ran towards the man on the ground. She started chest compressions, but to no avail. “She said he was pretty much gone when he hit the ground and they couldn’t save him,” Alan said, adding, “I wish I had her name because she was really doing its best to do something heroic.”

Alan also says he saw another man pass out a few minutes earlier.

Right in front of us, they stopped the parade as a young man – probably a teenager in his late teens or early twenties – descended to the ground and was surrounded by officers and paramedics. Someone with him kept saying he was having a seizure. They finally got him on a golf cart and took him away, and the parade began again.

KSDK also reports that a man was shot dead yesterday at a party in Dogtown:

A man was shot dead after he got into a fight with a lifelong friend at a St. Patrick’s Day party at a Dogtown home, police say.

Police say the shooting occurred in the 6600 block of Dale Avenue around 6:45 p.m. The victim, a 20-year-old man, was shot in the arm and abdomen. Police did not say how badly he was injured.

This story is continuously updated. Please send your advice to [email protected]