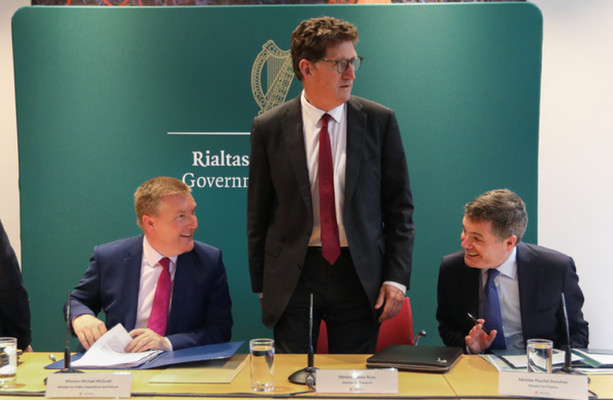 TRANSPORT MINISTER EAMON Ryan said there was “full commitment” to delivering the Metrolink project, saying the plan will benefit both Dublin City and the rest of the country.

It comes as the MetroLink project was relaunched this morning following Cabinet approval of the plan, with the planning due to be lodged with An Bord Pleanála in September.

Speaking at the project relaunch this morning, Ryan said previous plans had been scrapped due to the financial crash of 2011 and 2012 and borrowing constraints.

He added that the detailed consultations, including 8,000 submissions from the public, that have been carried out in recent years for the project ensure that it will take place.

“That’s in my mind the gracious guarantee we can give here, but it will continue because we’ve done the job in terms of incredible detail in length TII (Transport Infrastructure Ireland) and NTA (National Transport Association primarily and our department with the utmost seriousness, with the utmost commitment to delivering this,” Ryan said.

“I think I want to reassure the public that the reason he’s coming back is because it makes transportation sense for our city.”

Ryan said additional certainty is also provided by the National Development Plan (NDP), which will allocate €35 billion to public transport initiatives between 2021 and 2030.

“That’s what gives me confidence that we have the funding, we’ve done the engineering and the policy analysis. We have to go through the planning and then we’ll get it built.

When asked if MetroLink could be shelved by the government due to the impacts of a global recession as a cost-cutting measure, Public Expenditure Minister Michael McGrath said the funding was there. behind the NDP and that it would be followed regardless of any economic situation. shock.

“That commitment is there, built into our budget framework, and to the extent that we can be confident in anything, I believe we can be sure that the resources are there to support our national development plan,” said McGrath.

Finance Minister Paschal Donohoe agreed with McGrath and Ryan, saying that if planning permission is granted for the subway line, then it will be built.

“We are at a point where I think we can make the case that if this project sees a successful rail order award, then we will see it go into procurement and be built.”

Cost estimates were also provided for the construction of Metrolink, with the projected central cost being €9.5 billion.

However, there are several estimated cost scales, ranging from €7.16 billion to €12.25 billion.

However, speaking on Newstalk this morning, Tánaiste Leo Varadkar said it was an extreme case which could cost up to 23 billion euros.

“There’s an extreme scenario in the documents where it could cost up to 23 billion – no one thinks that’s going to happen, by the way – but that’s kind of the extreme end of things,” Varadkar said,

McGrath said the final cost of the project won’t be known until the government comes to market.

“The real test is when you go to the market. So when you go to market and have a recruitment process and get your offers, that’s the firmest estimate of the likely cost you’ll have.