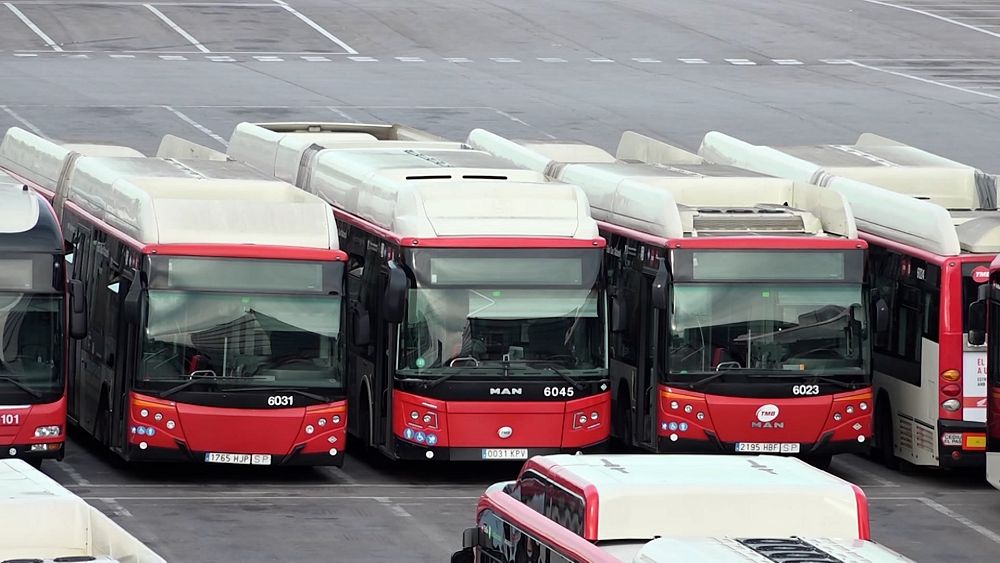 Barcelona’s buses could soon run on sewage sludge, as part of projects to generate biofuel for the city’s massive public transport system.

Some 900 buses ply the streets of Barcelona during rush hour, and its 1,100 buses rely heavily on fossil fuels to operate.

As part of a new initiative, the city is launching a pilot project to produce biomethane, a renewable natural gas, from sewage sludge.

It is part of the Nimbus project, which receives funding from the European Union, and aims to encourage a circular economy, starting with greener public transport.

According to TMB, the main public transport operator in the Catalan capital, 70% of its fleet was running on diesel in 2010.

In 2020, around 75% of buses were hybrids or ran with less polluting energy.

This is still a long way from the EU’s commitment to more than 30% of energy consumption for transport from renewable sources by 2030.

“It’s about using bioproducts, which already exist in the atmosphere and giving them new life,” said Angel Olmo, head of the TMB depot.

“Recycle the gases that are already in the atmosphere. And if they can be used to power these buses, then that’s the right thing to do.”

From sewage sludge to biofuel

The process will work by collecting the sewage sludge in the sewage treatment plants.

These sludges are generated during the water purification process and, in turn, create biogas.

Currently, this biogas – made up of methane and CO2 – is stored in silos and burned at a later stage to supply part of the plant.

But once the Nimbus project is launched in March, the CO2 from the biogas will be removed to create biomethane.

When compressed to high pressure, it will serve as fuel for a bus.

The wastewater from the Baix Llobregat will be one of the stations of the project. It manages around half of the wastewater in the Barcelona metropolitan area.

During the fall months, the plant receives some 190,000 cubic meters of wastewater, the equivalent of nearly 80 Olympic swimming pools.

Once treated, the water is used for irrigation, cleaning streets and sidewalks, recharging aquifers and feeding the nearby river.

The project is led by Cetaqua, a consortium formed by Barcelona’s main water supplier Agbar and TMB.

“We are doing it in collaboration with the Cetaqua Water Technology Center in order to start this pilot plant which will produce biomethane”, explained Mauri Poch, a strategic developer engineer working at the site.

â€œInitially, it will supply a single bus. The idea is to use it to feed many others in the near future â€.

It is hoped that when the project expands, this wastewater treatment plant will turn into an “eco-factory”, generating valuable resources instead of waste as a by-product.

Besides biomethane, TMB is currently carrying out two other projects involving greener energies: hydrogen and electricity.

Only one hydrogen bus is currently in testing, but TMB plans to add 46 to its fleets by 2024.

Electric buses are more popular. A full bus line has been operated by them since last summer, and two more lines are expected to transition next year.

Half of the fleet is expected to be electric by 2030, with buses recharging at night.

“The idea is to continue this pattern of electric vehicles powered by batteries that recharge during the day or fully recharge at night,” explains Josep Armengol, head of technology at TMB.

However, not everyone is on biogas buses.

Adrian Fernandez, Head of Mobility at Greenpeace, argues that it still relies on our ability to generate waste.

â€œEven if it is an alternative to reduce the CO2 emissions generated by public transport, we do not believe that it is a solution that can be generalized to the entire bus fleet because it does not there is not enough waste.

And, of course, the alternative of generating more waste to generate more methane is out of the question. “